So we had 4 people born in October (parents planned since January, if you get the drift), we usually celebrate all of their birthdays at one go because there’s just too many birthdays in one month! We had our dinner at The Forum which is located in The Signature Serviced Suites & Studios, Desa Sri Hartamas.

We bought the ‘Happy Birthday’ balloons from J&D Store in Summit USJ. They have a few other party stuff along with a bunch of toys so you can check them out, reasonable price as well. (They look like they are doing an opening ceremony right? HAHAHA)

As for the cake, we got it from PetiteSyireen CustomCakes (based in USJ4 Subang Jaya). This is our second time ordering from her as we loved her chocolate cake, the sweetness of the chocolate is just right.. not too sweet or too bland.
I didn’t take many pictures of the interior or food.. these are some of the food that we ordered. The Mexican burger (RM29) as well as the Oven Roasted Chicken (RM30) were the ones that I didn’t took a picture of. The Forum Burger RM40
The burger consists of beef patty, mayonnaise and cheddar cheese, served with fried onion rings and salad at the side. This was the burger that I ordered, it tasted a little bit dry to me though but the onion rings were good.

Ayam Masak Lemak RM26
Served with steamed rice and prawn crackers. My friend Siang Siang ordered this and mentioned that it was okay, however she wouldn’t spend that much on something like this again as you can just get a cheaper version which taste just as same.

Pesto Salmon Spaghetti RM31
Three of my friends ordered this, two of them however mentioned that it tasted a little bland. It’s basically spaghetti with pesto sauce served with salmon. 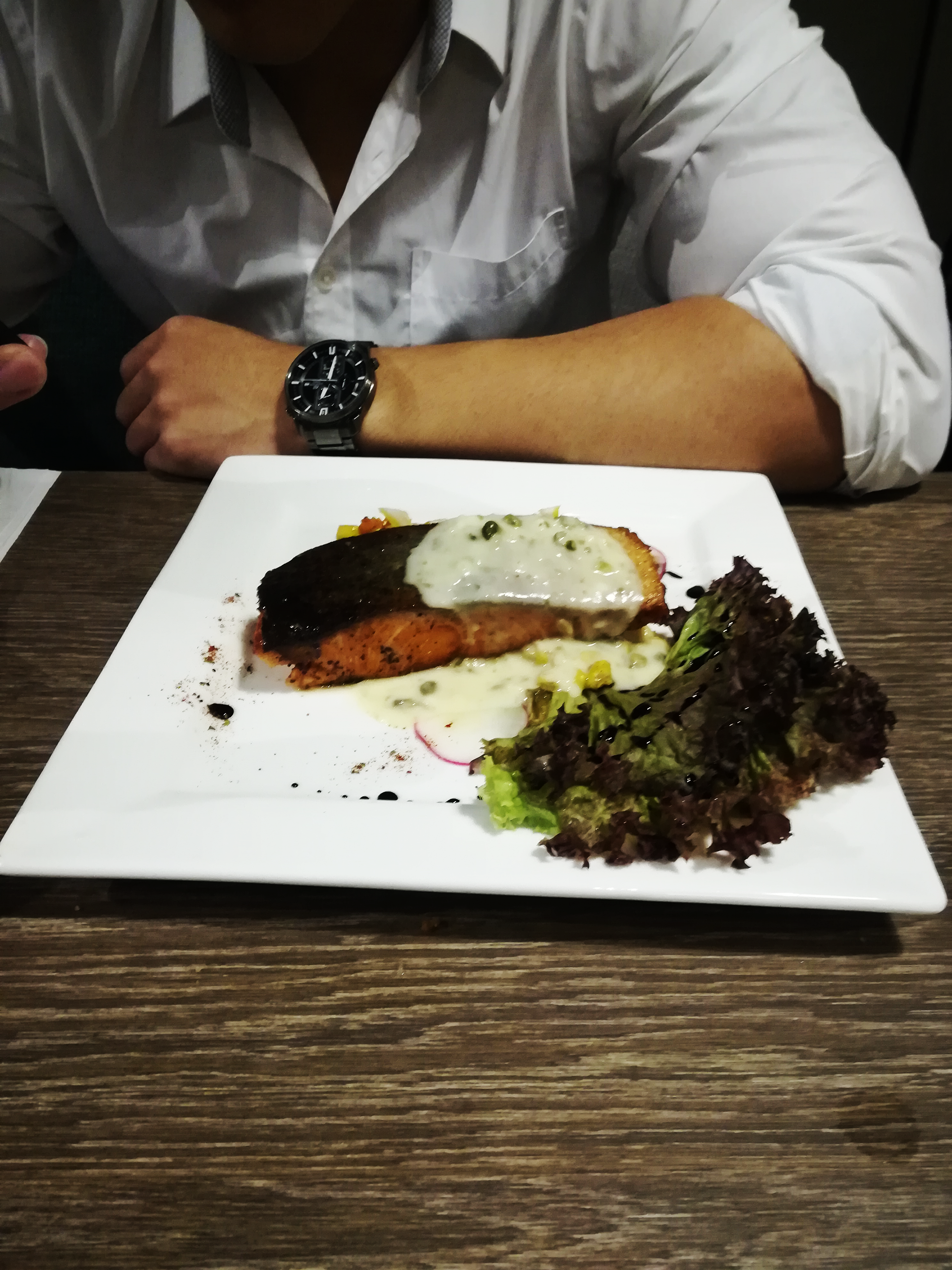 Salmon Steak RM39
You should not order this if you are a big eater. There’s nothing much aside from the salmon itself as well as some corn, green lentils, couscous and salad at the side.
Overall, I would say The Forum KL is a place with great atmosphere, high ceilings and windows. Good for a date perhaps? Or a large group of friends. They do catering as well like a buffet or any events. Since we came at night, we didn’t get to see how it would look like daytime. I think the place would look nicer during the day compared to night as natural sunlight will appear through the windows and thus, nicer pictures too (my phone & camera can’t handle the bad lighting thus bad quality pictures were taken 😛 hehehe)
After dinner, some of us ended up at Murni USJ to play some monopoly deal (because somebody was so eager to play HAHAH jokes love you) and have supper since some of us were still hungry.
The Forum KL
Address:
3 Jalan Sri Hartamas 22,
The Signature Serviced Suites &, Studios,
Desa Sri Hartamas,
50480 Kuala Lumpur,
Malaysia.
Opening Hours:
Mon, Weds, Thurs, Fri – 12pm to 10pm
Tues – Closed
Sat, Sun – 10am to 10pm
PetiteSyireen CustomCakes
Instagram: @petitesyireen_customcakes
Facebook: PetitesyireenCustomcakes
J&D Store
Address:
GF,
Summit Subang USJ,
45 Persiaran Kewajipan Usj 1,
47600 Subang Jaya,
Selangor, Malaysia
Opening Hours: 10am – 10pm